Cygnus is one of the largest constellations in the night sky, and is very easy to find due to the brightness of its main stars. The brightest one, Deneb, is one of the three stars known for making the "Summer Triangle", the two other ones being Altair (from the constellation Aquila) and Vega (from Lyra). Cygnus represents a swan, but is often known as the Northern Cross.

We decided to image Cygnus randomly while trying out the Omegon Mini Track LX2 as a star tracker. We were just done spending one hour on Rho Ophiuchi, and decided to try a constellation for the first time!

We only spent thirty minutes on it, as our goal here was to get the overall shape of the swan and the blanket of stars visible in that area. We plan to revisit Cygnus in the future and spend several hours on it to really capture the numerous nebulae it is home to.

Huge thanks to Benny Johnson for lending us his DSLR camera and allowing us to get this beautiful image!

30 lights, calibrated with Darks and Bias

Cygnus with the main stars visible, click on the arrow for the outlines 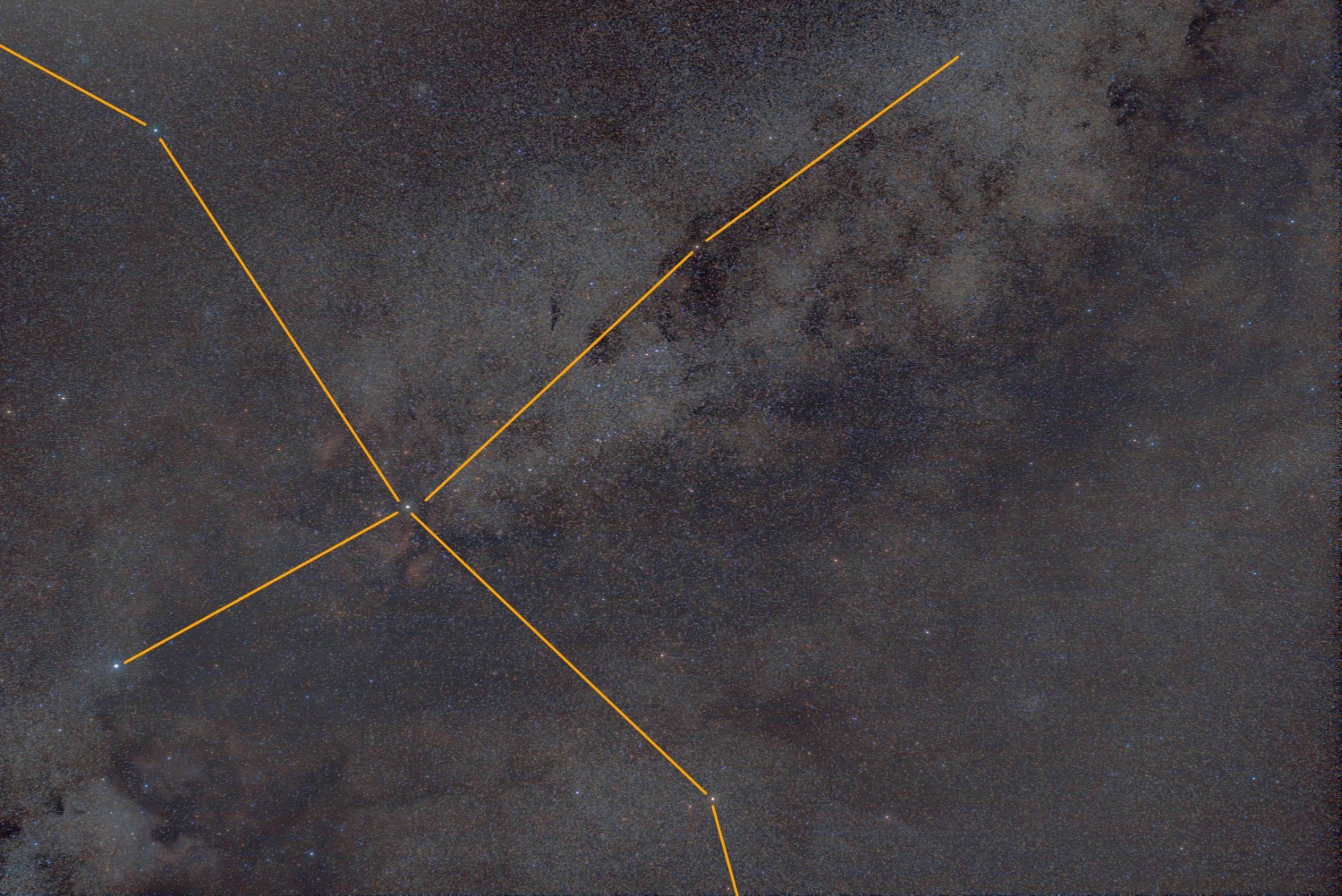 How to find Cygnus?

Cygnus can easily be found high in the night sky during the Summer season, all the way until the end of Fall. To locate it, simply look for the three brightest stars forming the famous Summer Triangle (Altair, Deneb and Vega). You can quickly know if you are on the right star if you see that it is part of a large asterism resembling a cross.

Because Cygnus represents a swan, Deneb lies where the tail of the bird is, while Albireo is located at the neck of the animal. Both wings are easily recognizable as well.

[As seen in The Constellations Handbook]

Phaethon, son of sun god Helios, was a stubborn teenager who wanted to ride his father’s chariot so bad that he stole it. Despite his friend Cygnus’ disapproval, Phaethon rode the chariot into the sky, but quickly realized he wasn’t as strong as his father to control the two horses pulling it. The chariot flew so uncontrollably that it started to burst into flames, the trail of smoke painting the night sky with the Milky Way band. The teenager then fell to his death in the river: Eridanus.

Cygnus discovered his friend’s body, trapped underwater, and begged zeus to transform him into a swan so that he could retrieve Phaethon and give him a proper burial. Cygnus was then placed into the night sky, in the middle of the fiery trail of smoke created by his friend’s flight, the Milky Way.

What deep sky objects are located in Cygnus?

Cygnus contains several popular nebulae, such as the Veil Nebula, the North America Nebula, and the Pelican Nebula. You can also spot two Messier objects, M29 and M39, both being open star clusters.

It got this nickname because of its shape that looks similar to the continent of North America.

One of the most famous parts of the North America Nebula is the Cygnus Wall, visible on our image near the bottom.

Click on the image to read more about this target and see our high definition image of it.

Messier 39 is a beautiful open cluster that does not require a long total exposure time to look nice in pictures.

Our image on the right was taken in only one hour. M39 is one of the nearest clusters to Earth, after the Pleiades, the Beehive, and a couple of others.

We used a small star tracker to capture this image, as we needed to take 60-second long exposures with our 50mm lens and did not want to use our bulky Atlas EQ-G motorized mount at this location.

You can find our full review video of this tracker below, or read our written review by clicking HERE.

Although this was a quick test, as we only spent 30 minutes on it without any planning, we're glad we decided to give it a try! This motivated us to try capturing more constellations in the future. We'll edit this post when we get a better wide field image of Cygnus.